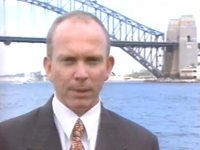 That threat is now being withdrawn but not for CRA

Talks will take place in Sydney over the weekend between the former Prime Minister and senior ACTU officials.

No doubt Mr Keating is also embarrassed his former rival has been
brought in to resolve a dispute the Prime Minister thought he had solved.

Opposition Leader John Howard says it’s clear Messrs Kelty, Keating, Brereton and Ms George have fallen into an industrial
black hole, and Bob Hawke has put up his hand to bail them out.

Nothing’s gonna change, the company is not gonna try and bait us with any half deals of anything.

We’ve said right from the onset equal pay for equal work and that’s what we intend to sit here to do the whole way through.

Waterside workers are expected to vote to return to work within twenty four hours It’s also expected the national coal strike set to begin tomorrow has
been averted.