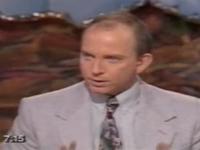 Across Australia you’re with First Edition

Outbreaks of tuberculosis have commonly been thought
to be a thing of the past relegated to history.

But there are fears now that we haven’t really conquered
this sometimes fatal disease.

One hundred and eighteen Telecom workers
from a suburban Melbourne branch were
recently tested for TB after one possibly two
co-workers came down with it.

Now while this could simply be a result
of former vaccinations, health
authorities are not being complacent
with us now is Doctor Brian Dwyer.

Dr Dwyer specializes in TB research and
until last year was head of the Turberculosis
Centre at the Fairfield Infectious Diseases Hospital.

Now for those who don’t know what TB is
and how it affects us can you just give us
a bit of a run through there.

Sure, TB is caused by a germ which is
sensitive to antibiotics.

it’s transmitted from one person to another
through one person who has active infection
causing disease in the lungs being able to cough
out infectious particles into the air which other
people can then inhale and become infected.