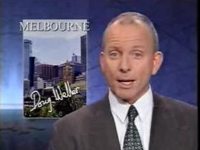 Face to face Britain and the IRA talk peace.

And an air borne invasion of the Chinese Consulate.

There’s wide-spread concern tonight about the huge amount of goods being stolen in the run-up to Christmas.

The problem is made worse by an increase in shop stealing gangs which are targeting shopping centres across the nation.

The christmas shopping season is in full swing.

The Retail Traders Association says shoplifting gangs are on the increase and they are made up of adults and children and they’re costing the industry millions.

There’s been another historic step towards peace in Northern Ireland.

The advance comes just one hundred days after the IRA declared its cease-fire.

This report from the ABC’s Neil Ross,

Three of the five are former IRA prisoners hardliners chosen to reassure Republicans they are not being sold out.