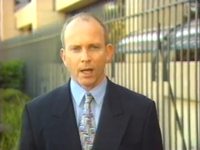 As the industrial storm gathers pace distraught employers have this plea to ACTU secretary Bill Kelty.

Emotion to from staff at Weipa who have refused to sign the company contracts and missed out on massive pay rises.

I declined the offer because i didn’t want to give up my rights of union representation or to bargain collectively.

The industrial action is now across the board. At midnight CRA coal miners in Queensland and New South Wales walked off the job for forty eight hours.

From tomorrow there will be a five day strike at all major ports.

By Tuesday a week long shutdown of the entire mining industry is proposed.

As well, next week, workers in the power, oil and chemical industries will begin targeting CRA.

The manufacturing sector will also become involved. So will transport
employees and the campaign may soon spread to other companies.

Teachers are ready to join.

This dispute, let me make it very clear is primarily targeted at the activities of a bully boy company that had got away with quite a bit and we’ve
decided now that they can’t get away with no more.

The ACTU’s fight is with CRA and its subsidiary Comalco but its also with the Arbitration Commission.

The union body wants the commission to act to tidy up loop holes which it claims are allowing the individual contracts issue to get out of hand.

If the commission fails to act, then the ACTU wants the federal government to intervene directly something its failed to do so far.

Industrial Relations Minister Laurie Brereton wants the company to back down.

I mean it is a pathetic performance by a Minister who is out of control.

Commerce and Industry say the issue must be resolved before it spirals out of control.

There will be boards considering investment decisions that affect Australia and they will be considering competing locations and they’ll just tend to put the proposal for Australia aside I would guess.

The five day stoppage on the waterfront will cost about a hundred million
million dollars to both ship owners and cargo owners and of course further damage our international trading reputation.

Oh yes, no doubt, you do get, we do hear quite a lot of the time the flow of goods through our ports is quite a worry to many exporters.

CRA executives have been involved in meetings all day but so far have no public comment.