Image of article: Shown below

There is good news for viewers wanting to wake up to something serious on television.

First Edition starting on February 8, is the ABC’s early morning offering for 1993.

Don’t expect cute-puppy stories or beaming presenters – this is one hour of hard news.

The program will screen on weekdays at 6.30, meaning a 3.30 start for presenters Doug Weller and Kate Dunstan, who say the only bonus is not having to be merry in the morning.

“It is going to be a much more serious program than morning television has been to date.” Dunstan says. “It will be hard news, a lot of international news and a lot of politics. It will be a really serious program.”

There are those who may argue few people will want to fall out of bed to watch the woes of the world on television. But Weller has a different view and points to the success of ABC Radio’s morning news programs, which have a large and faithful audience.

“I don’t think what we are doing is really brave,” he says.

“There are a lot of serious-minded people who watch television at that time of day.”

Dunstan is a familiar face in the ABC TV’s newsroom, reading weekend bulletins and, in summer, the nightly seven o’clock news.

Earlier she was one of the original producers of the Seven Network’s Tonight Live news.

She wants the program to set new ground rules for Australian morning television, which in the past has aimed mainly to entertain.

The timeslot gives the first bite at international news and events developing in Canberra.

Singer also points to the way ABC radio news in the morning tends to set the agenda for the day’s news.

“If you listen to radio in the morning, a lot of it creates the news of the day,” she says.

“That’s what we want to do – it’s just that we’re on television.”

By the time First Edition goes to air the team will have had three weeks to make a series of pilots and organise their schedule.

Singer, Dunstan and Weller remain undaunted by their starting time.

Perhaps their zeal has something to do with the origins of First Edition? 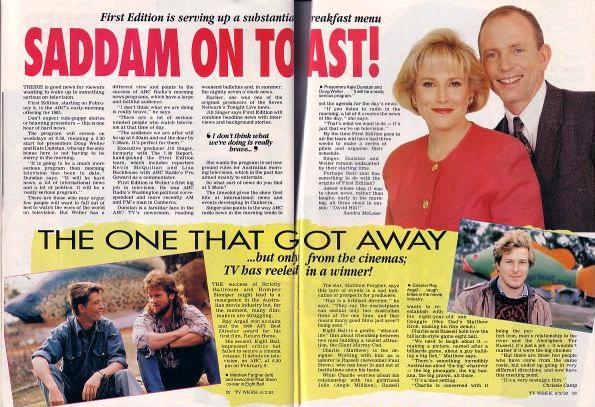