Whenever anyone asks me “Who is a great public speaker?”, I always give the same response…Barack Obama. 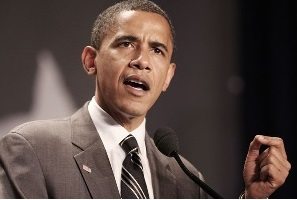 His answers about Trump were short and sharp, clear and to the point. His language was easily understood. He paused in between messages allowing the audience to process what he said. Instead of speaking too fast, he allowed his messages to resonate.

A lot of people make basic mistakes when delivering presentations.

They rush through it talking too fast, but not Obama.

Sometimes, the President will speak ‘off the cuff’ but other times he reads from a teleprompter/autocue, as he did in his Selma Bridge Speech.

A really good way to learn a skill is to study others doing it well. Watch the clips included in the links above, and any other Obama speeches you can find.

Do You Fear Public Speaking?

Tweets by @douglasweller
Are journalists out to get you?

Answer the Question!
Scroll to top