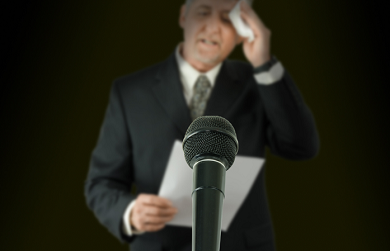 I find the number of people who fear public speaking staggering.

When facilitating our Public Speaking and Presentation Skills Training Courses I constantly observe competent, professional people who are terrified when speaking publicly.

I facilitated a course recently with a very successful business person.

This person runs a prosperous national company and presents very well. He’s intelligent, articulate and a fantastic communicator. Yet, he hates public speaking.

How could somebody who is so effective and capable in his business life loathe public speaking? Why do so many people dislike it?

Presenters feel pressured to get it right. They don’t want to make a mistake.

Famous people get nervous too

Branson’s introduction to public speaking wasn’t a confidence builder. His public speaking nerves stemmed from an “excruciating experience” in a school speech competition where speakers were abruptly gonged out of the contest if they made one mistake.

As you would know, Branson is an extremely successful businessperson, yet Branson’s negative experience in a school contest had a lasting effect. He admits speeches still make him nervous. But he’s listened to advice, practised and benefitted from experience.

When he finally did participate in a public speaking course he took up teaching at night to keep his communication skills honed. Buffet believes that “if you can’t communicate and talk to other people…you’re giving up your potential.”

Understand that your presentation doesn’t have to be perfect. More than anything, people want to be informed and gain value from the speaker.

Public speakers make mistakes.  I certainly have. I often get tongue-tied, speak too fast, fall over words and occasionally have mind blanks. But I don’t let it put me off, I just continue.

An audience doesn’t gain much from a perfectly delivered but lacklustre presentation.

Know your audience and work out where the value is for those in the room – and also for you in the public speaking situation.

Providing value to your audience will matter more to them than a slick performance that wastes their time.

I’m not saying you shouldn’t care about making mistakes. You absolutely should care and you should learn from them to improve your performance. That’s what I try to do.

But never let mistakes cripple you in the moment and take away from what you have to say.

Whenever anyone asks me “Who is a great public speaker” I always give the same response…Barack Obama.

His answers about Trump were short, sharp, clear and to the point. His language was easily understood. He paused in between messages allowing the audience to process what he said. Instead of speaking too fast, he allowed his messages to resonate.

A basic mistake speakers make when delivering presentations is rushing and talking too fast, but not Obama.

Sometimes, the President will speak ‘off the cuff’ but other times he reads from a teleprompter/autocue, as he did in his Selma Bridge Speech .

A really good way to learn a skill is to study others doing it well. Watch the clips included in the links above, and any other great speeches you can find.

Who's a Great Public Speaker? Barack Obama, that’s Who!

Tweets by @douglasweller
What is Corporate Media Services’ training philosophy? Media Language – Drowning in your own words
Scroll to top