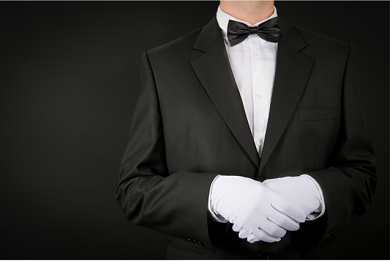 Media interviews can get ugly…

Yet, Stefanovic seemed to have only one thing on his mind: His claim that Burrell was unfair to say the Duchess of Cambridge, Kate Middleton, lacks the ‘X-factor’.

Stefanovic appeared incensed about comments Burrell made in an earlier interview about Kate Middleton.

Referring to Middleton, Burrell had stated, “…that extra something which you call the X factor, the magic quality, charisma…it’s not there.”

He also said, “I met Mother Teresa, she had it, Pope John Paul II had it, the Queen has it, Diana certainly had it, Kate doesn’t.”

The butler quickly found himself in the firing line and The Today Show host was relentless in his questioning about those X-factor comments.

The interviewer’s questions and statements included:

•“You said she lacks the X factor that Diana had. That is way too harsh, isn’t it?”

•“I don’t even know where you came from, she doesn’t have the X factor of Mother Teresa, the Queen, Diana… Why would you even say that?”

•“How dare you even say that?”

•“Do you have some sort of oxygen deprivation at the moment? I mean, come on. Leave her alone”

•“If William is king one day and I found out you had said that about Kate I wouldn’t be letting you back into the country.”

No matter how many times Burrell answered in support of the Duchess, Stefanovic stuck to his line of questioning. He wouldn’t let go.

Burrell apologised straight off the bat for his comments saying, “I apologise if that was taken out of context. What I was trying to say was Diana was unique and irreplaceable and she had that something, which is charisma or magic. I’m not quite sure what it is.”

In this case, many audience comments on The Today Show’s twitter feed were critical of Stefanovic’s performance and sympathetic to Burrell. 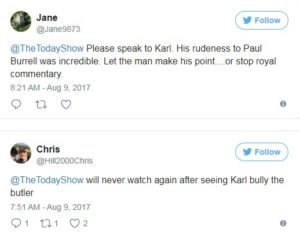 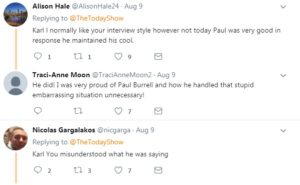 Maintaining composure in hostile interviews is essential. Losing your cool will only reflect negatively on you.

If you want your audience to remember your message, rather than your anger under pressure, remain calm at all times.

Backpedalling on your statement

As the interview continued, Burrell said, “…maybe my comment was out of kilter. I didn’t mean it that way.”

Don’t make comments for which you must apologise.

Backtracking is a bad look.

Generally, you’ll only have to back down if you haven’t done adequate preparation and anticipated the consequences of your comments.

If you make a claim in an interview, back it up. Don’t back down under pressure.

But if for some reason you do have to back down, do it in a definite way. For example, “You’re right. To say that was out of line. I should apologise and I do.”

Paul Burrell was on the Today Show for a reason. It’s unlikely he chose to be there for this grilling.

He may have been there to discuss the etiquette seminars he was conducting at the Versace Hotel on Queensland’s Gold Coast, or the charity morning tea he was hosting with proceeds going to Youngcare.

Perhaps he was there to discuss the 20th anniversary of Princess Diana’s tragic death.

Unfortunately for Burrell, he didn’t take control of the interview and whatever points he had hoped to deliver were lost.

You always need to make the most out of any media opportunity to deliver your messages.

Paul Burrell’s media opportunity became an awkward interview where he spent the entire time on the back foot.

The time he had to deliver his messages on national TV was wasted.

Never go into a media interview expecting an easy interview.

I don’t know what was going through the mind of Mr Burrell before the interview but I don’t think he expected to cop what he did.

Have the danger zones covered off before you enter any media interaction or interview.