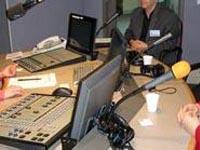 Radio is one of the most useful mediums in terms of getting a media message across. People tend to fear radio because it is a live medium. Some people feel that they can’t communicate properly if they can’t see the person who is conducting the interview. However, radio is a terrific medium and is very, very powerful.

Research tells us that most people listen to the radio at some stage of the day. So I just want to give you strategies for dealing with radio and I want to walk you through the different components of the radio medium.

You’ve basically got radio news programs, whether they are on the ABC, SBS or commercial radio networks. In that arena, you are only ever going to get across a very short message. It’s going to be very quick. It’s going to be a ‘grab’ or sound-bite when you are speaking to radio journalists from newsrooms; that is all they want. They don’t want you to go on for twenty minutes because they just don’t have the ability to accommodate that.

I’ve worked for radio news organisations at the ABC and I’ve worked for commercial news organisations. Short snappy comments are what they want. They simply want a ‘grab’. So when you are speaking to people on a radio news program, you simply ask them what they want, and then deliver it. This is very much the case for journalists across the board.

Ask the journalists what they want and what they’re after. Whether it’s a couple of quotes for a newspaper article, a couple of ‘grabs’ for a radio station or a longer interview. Whether it’s going to be pre-recorded or it’s going to be live. You need to empower yourself in this process, you need to actually say to these journalists, ‘what do you actually want from me?’.

Following on from ABC Current Affairs Radio, there are radio programs which are very similar to current affairs interviews. By ‘programs’, I mean interviews you might have with Alan Jones in Sydney or Neil Mitchell in Melbourne. It will be a longer interview and if it is going to be in that arena, it is more likely to be a bit feisty, depending on the topic. You need to know how to get your message across in a situation like that. You also need to know how to remain calm because when people overreact, the whole interview becomes counter-productive. There is generally an amount of ‘radio theatre’ in commercial radio interviews.

And then you’ve got talkback radio. A lot of people fear talkback because anybody can ring in and they can make any claims at all. So people tend to get very scared of talkback radio and they tend to back away from it when there is no need to. Talkback is a terrific medium if you want to get your media message across because there are very few other areas of journalism where the journalist or the commentator will actually give you the floor for a period of time. So people tend to steer away from talkback radio because they’re scared that people are going to call them and make whatever comments they want. Many people fear it will make them look like an idiot.

Suppose you receive a phone call from a commercial radio station, Neil Mitchell for example, wanting you to come on his program and talk about a controversial issue. People tend to back off because their reputation is going to be on the line.

If you do receive phone calls out of left field from someone at a talk back radio station, how would you handle that? Somebody rings up and says ‘I am from xyz program and we have been told that you and your organisation are corrupt.’ How do you think you would handle that?

You are only in control of three things in any media situation: firstly, what you say (your key messages), secondly, how you look (the way you are dressed) and finally, how you deliver your media message (e.g. physically and/or verbally). You need to make sure that you are in total control.

Don’t repeat words that can be manipulated by a journalist. A journalist may say that “your organisation is corrupt and outrageous”. You do not respond and say “we are not a corrupt, outrageous organisation”. If you do, you have taken ownership of those words. You are then on their agenda, not your agenda. If faced with accusations like that, you respond by saying “that’s not true, that’s not right. Our organisation is a terrific organisation, we are currently undergoing some problems and we are fixing those problems”.

So finally, I want to walk you through some of the theories we are talking about. News journalists, like all journalists, are facing deadlines. The deadlines in a radio newsroom come around very swiftly. Generally speaking, they are either on the hour or the half hour. So understand the amount of pressure these people are under if they’re pumping out news bulletins every half hour. By the time the news bulletin goes to air, if these journalists go and get a cup of tea and get back to the newsroom, they have about twenty minutes before it’s time for the next news bulletin.

In a radio news bulletin, you will never hear anything longer than about five to ten seconds, unless it’s a huge news story. Most radio stations have a very broad audience; so again, you need to focus on the objective and the outcome.

It’s very difficult to condense an important issue into about seven or eight seconds but if you don’t, they will. I’ve had people ask me “how can I condense four years of work into a few seconds”? I tell them it’s very hard, however, if you don’t do it, the journalist will, and you may not be happy with the outcome.

So you don’t go into these situations thinking you can’t do this or that. You have to fit in with what the journalist is doing and what the radio station is doing. If you deliver a long rambling quote or comment that goes for thirty seconds and it can’t be edited, then it won’t be used.

Current affairs programs also have deadlines. How do you find out what their deadline is? You ask them. A lot of people feel confronted by the whole process of dealing with journalists and the media and they don’t ask questions. You need to empower yourself in this process and ask the journalist what he or she is looking for, what it’s going to be used for, how much material they will need from you, what audience is the report aimed at? Then you will have a good understanding of where they’re coming from and they will have an understanding that you do know how to deal with a ‘media situation’.

How To Build Relationships With Journalists
Scroll to top