It’s August 1989 and QANTAS is about to fly the longest non-stop commercial flight in history.

The aircraft doing the honours is a QANTAS Boeing 747-400, registration VH-OJA, ‘City of Canberra’.

When I received a call from ABC management asking me what my August plans were I said “I’ll be on holidays”.

When they told me what was planned, I nearly jumped down the phone. I decided to throw my board shorts and very large straw hat back into the cupboard – Surfers Paradise would have to wait.

I was one of only 23 people aboard that record breaking non-stop flight from London to Sydney. It took 20 hours and 9 minutes which felt like forever at the time.

I was privileged to be the only broadcast journalist who was on-board.

From memory the passengers consisted of about five journalists, the crew and a few others.

QANTAS needed to use special fuel to make the distance and we had strict baggage weight limitations.

I had a broadcast point set up just outside the flight deck. It consisted of a microphone, and a box of some sort.

It worked on the tarmac at Heathrow but that was about it.

Once we were in the air I had major trouble broadcasting back to Australia so the crew allowed me into the flight deck to use their communications equipment.

Sitting just behind the crew I put on the headphones, adjusted the mic and felt like captain kangaroo.

Apart from the landing, that’s where I stayed for most of the trip to Sydney, sending reports to the ABC when the crew could spare their radio and we had adequate reception. 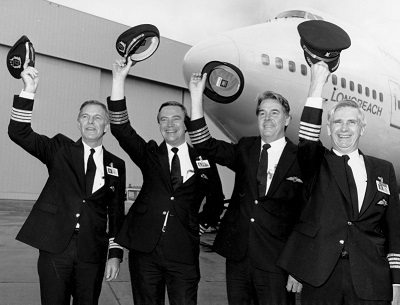 It was big news at the time and the crew went out of their way to help me do my job. They even agreed to a quick interview for the ABC ‘AM’ program as we approached Sydney.

I was about to do a report when I asked, “Hey, do one of you guys want to be on ‘AM’?” To my delight they did and going live to air took on a whole new meaning.

The opportunity to be a part of that historic QANTAS flight was a highlight of my career.

Now that same aircraft has flown it’s last commercial flight and is retiring to a new life as a museum exhibit at Illawarra Regional Airport.

Qantas has gifted the aircraft to the Historical Aircraft Restoration Society (HARS) where it will be on public display as a tourist attraction.

· This aircraft has flown nearly 85 million kilometres, which is equivalent to 110.2 return trips to the moon

· On Thursday 17 August 1989, it set the record for having flown the longest non-stop flight (London-Sydney) of any commercial airline (flight number QF7441)