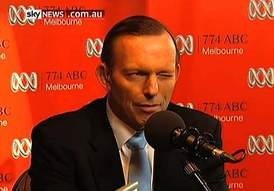 A wink of the eye can say so many things. You can give a reassuring wink, a flirty wink, or even a conspiratorial wink.

This small and simple physical gesture can send many different non-verbal signals.

Australian Prime Minister, Tony Abbott, was reminded of what a wink can mean as he took calls during a filmed radio interview.

A 67 year old female caller, unhappy with the 2014 federal budget, said that to make ends meet she worked on an adult phone sex line to subsidise her pension.

As he listened, the Prime Minister winked and smiled when he heard her occupation, and the footage went viral.

Was his wink mocking the caller in amusement? Or, as his press secretary suggested, was he simply winking his approval to continue on with the call?

Body language is a crucial part of the media process, especially when TV cameras are involved and although Mr Abbott later admitted he shouldn’t have done it, the damage was already done.

What you say in the media isn’t the only message the audience hears loud and clear. Your body language can sometimes deliver a major message and if it doesn’t match what you’re saying, beware!

The Australian public had their ears peeled and their eyes wide open as they watched Australian Treasurer, Joe Hockey’s, 2014 federal budget speech.

His speech was an ultimate showcase on how mismatched body language can damage a spoken message.

The budget address is a carefully staged event. The House of Representatives cameras are strategically placed to ensure they get a good shot of the Treasurer speaking, with the Prime Minister and a range of backbenchers sitting behind him.

The job for everybody behind the Treasurer is to nod, look concerned and interested at all of the appropriate times.

In this example, the body language of relevant people should convey the message that the government is standing solidly behind the Treasurer as the Australian public hears the harsh budget news.

For some unexplained reason, Prime Minister Tony Abbott decided to have a chat to those sitting next to him during Joe Hockey’s speech. He was even seen having a giggle and covering his mouth with his hand.

This was an appalling look when the Treasurer was delivering bad news to millions of Australians.

The audience could interpret the Prime Minister’s amusement as flippant disregard for how the budget would affect them, even if his laughter was completely unrelated.

Treasurer, Joe Hockey, also left himself wide open by dancing in his parliamentary office in Canberra to the strains of ‘This is the Best Day of My Life’, before delivering the budget. His excuse – the song is one of his son’s favourites and his son was with him at the time…but that’s not the point.

His body language and media messages didn’t align. He was inappropriate and his behaviour left him open to scrutiny.

The first question veteran Australian journalist, Laurie Oakes, asked Joe Hockey on budget night was why he danced before delivering the speech. That interview question pretty much derailed the Treasurer’s budget message.

Dancing when you’re about to deliver a budget that will negatively impact millions of Australians just isn’t a good look for the country’s Treasurer.

A photograph is as powerful as video

Body language sends just as strong a message in print and online media as it does on TV. A picture paints a thousand words as the old saying goes.

Only days before the budget speech, Treasurer Joe Hockey was feeling the heat after being snapped smoking a cigar with the Finance Minister, Mathias Cormann.

Both men were probably just relaxing after the gruelling process of pulling together such a tough budget. The problem is that cigar smoking is often associated with celebration.

Unfortunately the Treasurer’s audience, mainly the Australian voting public, had little cause to celebrate the federal budget.

Joe Hockey’s body language should have supported his verbal message that times were tough. All of his media exposure during budget time should have been sending a message of empathy and understanding to his audience.

Instead he was doing a jig a stone’s throw from the National Press Gallery and puffing on a cigar.

Media examples like this exist on all sides of politics right across the globe. Politicians are accountable to the public so they are constantly scrutinised by the media.

When big news is breaking in the media you should always be conscious that there are cameras and journalists everywhere ready to catch all appropriate and inappropriate moments.

If you want assistance regarding engaging with the media , contact Corporate Media Services for more information or training about  traditional media or social media. Make an email enquiry now… or call 1300 737 913